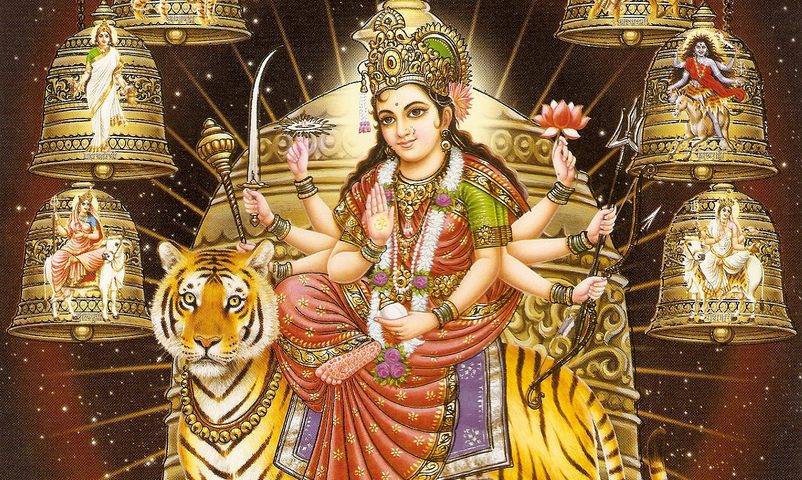 The Thimphu Local Chapter of Hindu Dharma Samudaya of Bhutan, with the support of the Royal Government and the devotees is organizing the puja at Durga Mandir at MOWHS colony and at Devi Panchyan Mandir at Kuenselphodrang, Thimphu maintaining the safety protocols against the ongoing pandemic.

Navratri Festival is celebrated by Hindus with great devotion for 10 days. Idol of Goddess Durga is worshipped during Navratri. This festival is celebrated by all Hindus. It is said one of the fiercest daemons, Mahishasura undertook severe penance to obtain a boon that he cannot be killed by a male, underestimating at his own cost the power of the female form, and started creating havoc everywhere. To stop him, Shakti took a very beautiful form of Durga and told him that she would marry him if he defeats her in a battle. It is believed that they battled for 9 days, and on the 10th day, Durga killed Mahishasura. Therefore the 10th day is called Vijayadashmi, day of the victory.

During the period of 9 days of navratri, 9 forms of Durga, called nav-durga, are worshiped in the following order:

The following priests will take part in the recitations of the ritualistic texts and prayers during the period:

08.00 hrs.  The Board members of HDSB and TLC shall meet at Dechenchholing fuel depot parking space.

Puja Starts after the Ghatasthapana.

Note: HDSB along with the Thimphu Local Chapter hasn’t yet decided the celebration of Vijaya Dasami Tika Ceremony due to the Covid-19 Pandemic. We are eagerly waiting for your good self’s advice and suggestion on the same.

In view of the present situation and for the safety of every individual, it is mandatory for everyone to: